We got away from NOLA for about 2.4 minutes this weekend to go to Boston, where Mr. TWMVO was born and raised. It was a crazy weekend with a family wedding, a memorial service, a house party that may or may not have gotten completely out of hand (but definitely did), and work. For some reason, no matter how much I begged, eating at vegan joints just didn’t top the “must do” list. BLAH.

Also BLAH: for being in New England there were zero Pumpkin Spice Lattes (#psl) or other pumpkin goodies in my life. I mean, honestly. I had one which was just the clear syrup pumped into a cup. It was not life altering and actually made me feel slightly sick. I was not impressed with you on that front, Boston. GET.IT.TOGETHER.

Anyway, there were two memorable spots for eats that I want to share with you here: Mamaleh’s and by CHLOE. Both of which I have eaten at previously and both of which I will eat at again in the future. So perhaps that’s all you need to know.

Mamaleh’s is not a vegan spot, but it is kosher and a Jewish deli which caters us to us friendly vegans. (Probably unfriendly ones, too, but I wouldn’t try it because it’s so good.) The first time I came here was back in the good ol’ days of Summer 2016 – before life was so horrendous and complicated and we were all wondering why we sold our country to Russians and billionaires… *sigh* those were the days.

I came when Alex and I were first starting to date and this deli had just opened and he wanted to check it out. Not expecting much (from the deli, I expect a lot from Alex), I was very pleased both with the food options and the full bar. Since then, whenever we’re back in Boston, we make at least one trip to Mamaleh’s.

My favorite and often my order is an everything bagel, vegan scallion “cream cheese,” capers, red onion, tomato. Then I make that bagel party in my mouth. Always get the pickle plate – their half sour pickles are pretty insane. (Incidentally, they were my first foray into half sours so I will always be grateful for them bringing that particular pickle into my face.)

so, so good. those BAGELS.

pickle plate + coffee. “too early” for the bar.

Their menu is labelled veggie and vegan and they will make substitutions for ya. I will say that I am praying to whatever vegan gods exist that they soon expand their vegan options as well as making some vegan sweets. I love you, Mamaleh’s – can you please just make some vegan babka already? Life is not okay. But seriously, you can eat here – and I recommend you do – but you will be quite limited in your options.

Get a boozy drink or if it’s “too early for a drink” by societal standards (please know I will never judge you), order coffee with alternative milk. BOOM. #alternativemilklife. On your way out, grab a bag or twenty of these incredible peanut butter cheetos called Bambas (very likely I’m the only one who was unaware of them as a Nebraskan girl) and take a photo in the photo booth. Because if you don’t take a picture in every photo booth, you will die and regret that.

On our last day in Boston, I had a work lunch with a client. Work is the worst, always getting in the way. Can I retire yet?! I had a pretty decent baby kale salad sans cheese at Parish Cafe, but by “had,” I mixed it around and looked like I was eating so I could save up and get to by CHLOE. next to Fenway (yes, there was also one next door to Parish Cafe, but you have to be able to recognize things in advance which is not my strong suit).

I had first been at by CHLOE. when I was a New Yorker and they’ve since taken over the world (or at least this nation). I’m super psyched about that. I love their food. It’s so tasty and so complex, but not full of vegan junk. The food is natural, healthy (or relatively healthy), and friggin’ amazing.

Here’s what I ordered with Mr. TWMVO and we ate it over the next couple of days or that’s at least what I’m telling you: 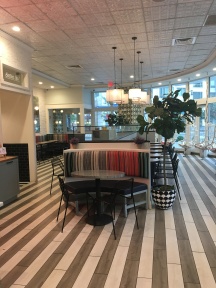 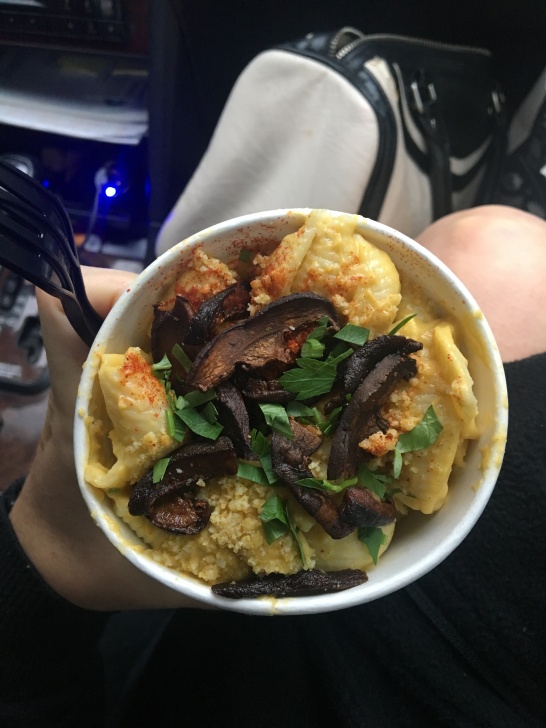 those mushrooms, tho. SRZLY. And I don’t even really like mushrooms.

pick up and go.

by CHLOE. is currently in NYC, Boston, Provincetown, and Los Angeles and now with TWO LOCATIONS IN LONDON. Done. That’s happening in November – watch this space. See here for their locations.

this pesto meatball sammie was too good. why did it have to end?!

This is the correct way to eat a cupcake, you monster. It gives the perfect ratio of icing:cake in each bite.

Other things I consumed on this trip included, but were not limited to: some dream-worthy hummus made by Alex’s mama, my body weight in pickles at various locations, some drunkenly ordered/drunkenly consumed Thai curry, cocktails on the Top of the Hub, and Sarma (which wasn’t as good as the first go around – but get yourself the kohlrabi fritters because they are more than you could ever imagine and then some).

We also stopped at Eatly by accident (yes, actually). We were trying to get to the Top of the Hub, and then spent roughly an hour in the store. We did not get wine, which is honestly one of my fav parts of Eatly, but we had a schedule that we were miserable at keeping to so there was technically no time. We got the vegan red wine pasta that is totally worth putting in your carry-on and getting semolina flour all up in your jewelry and jeans for. (We’ll throw it in some olive oil, roasted tomatoes, roasted zucchini, garlic – obvs – and fresh basil.) We also felt the need to buy and bring back some pizza sauce, tomato pesto, and, er…toothpaste. Don’t ask why we do the things we do. 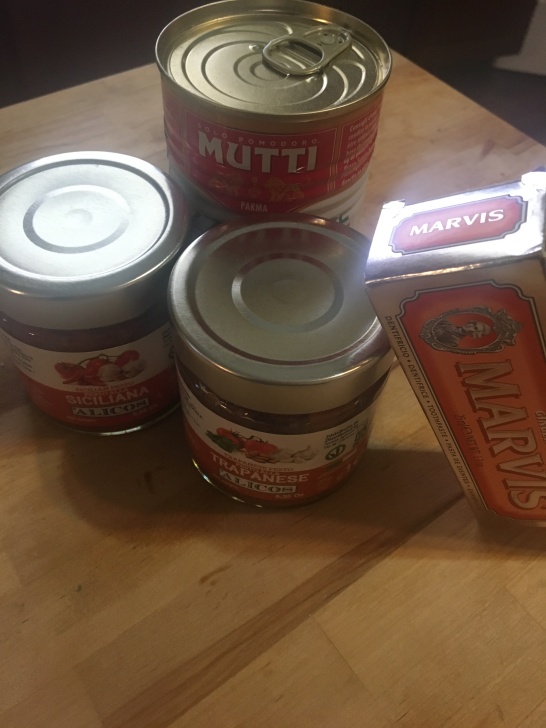 We came back about 13 lbs. heavier, having had great company but not enough time with any of them, and 1,000 books for our OcTOTEberFest (was that a shameless plug? Yea, absolutely). Alex and I got in the car and drove, I kid not, directly to Sacred Grinds because it was October 2nd which meant their #psl was out and I was deprived and I needed one.

And as ever, it delivered. I got it iced because we left Boston when it was like 60 degrees and landed in NOLA to a balmy 95 degrees. So it wasn’t quite as autumnal as I was hoping, but it was divine nonetheless. Thanks for the rescue, Sacred Grinds. 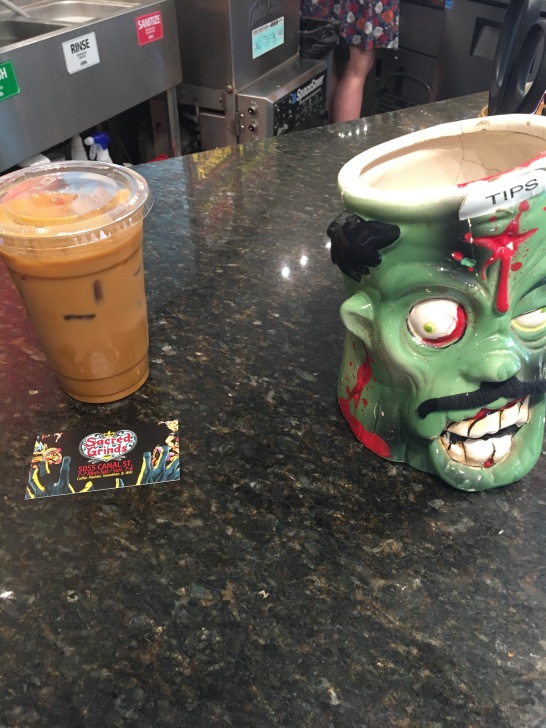 iced psl. side of stein.

I adore this place.

Though not visited on this trip, I also recommend vegans hit up FoMu and Veggie Galaxy. Both of which are divine and should at least be tried once, if not one million times.

View all posts by theworldsmineveganoyster